This entry was originally made on Reporting on a Revolution on April 16, 2008

From my Geology News Feed a link to a pretty cool application for assessing the impact of sea level rise on coastal areas. The application written by Alex Tingle of Firetree.net uses NASA elevation data and the Google Maps API to create dynamic maps of flooding. I played around a little with Mumbai. It’s tempting to run a disaster scenario. Just choose a sea-level rise of 10-15 meters and watch the city go under water. But the results are not very surprising and not too realistic either. This massive a rise in sea level is at the extreme end of the climate change and sea level rise scenarios possible if the Greenland and West Antarctic ice sheet completely melts. May happen but unlikely for the next couple of centuries.

I wanted to find out whether the elevation data underlying the application was fine enough to depict subtle variations in topography and the effect of a small change in sea-level. I used just a 1 meter rise in sea-level. The resulting map impressed. The flooded areas were restricted to the low-lying mudflats and mangroves along the Panvel, Thane, Mahim, Gorai and Vasai Creeks. The rest of the city was unaffected, which is to be expected since the land surface of Mumbai is hilly in places or has been raised by several meters during land reclamation projects. Climate scientists give scenario based range of values for sea-level rise this century and a sea-level rise of 1 meter by the end of the century is a distinct possibility. This would mean large areas of Mumbai and surrounds will be at risk. Image below shows Mumbai and its suburbs and exurbs. Pink areas are the built up concrete jungle, lighter green is land vegetation, blue is water and dark green-brown areas are tidal mudflats and mangroves. 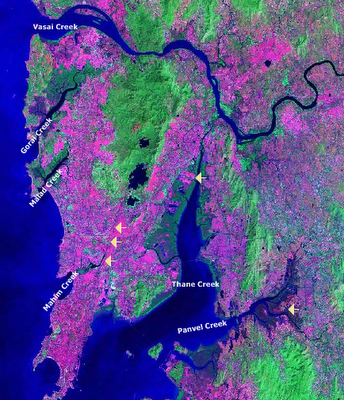 A 1 meter sea-level rise will affect these mudflats the most. Yet at places I have marked with arrows near the Panvel and Thane Creeks, pink is intruding upon the dark-green, which means construction is eating up those low-lying areas. All these new constructions are raised a few meters above the original surface and that may protect them against a future sea-level rise. But there are other factors at play and these were demonstrated with terrifying clarity during the flooding by the Mithi river of Bandra-Kurla complex and adjoining low lying areas on July 26-27 2005. As shown by arrows near the Mahim Creek area which trace the Mithi river, mudflats and mangroves were built upon and the river channel reduced to a narrow drain. Since no natural holding areas for the water such as mangroves were left, a combination of high rainfall and high tide led to water level rising up several meters and inundating buildings and even the airport.

But we never seem to understand and learn from history. The same mistakes are being repeated at Panvel and Thane Creeks. When I was growing up, one of the great pleasures of driving to Mumbai from Pune was the gorgeous landscape after Panvel, all those unspoiled tidal channels, creeks and mudflats and mangroves until you crossed the Vasai Bridge. Today that area is an ugly sight. Mud-flats and natural drainages are being filled up and we may soon have constructions coming right up to the banks of the main Panvel tidal channel. The events of July 26 2005 showed how even at present sea-level, bad urban planning can led to severe flooding. The consequences of just one meter rise in sea level can be difficult to predict and may be more damaging than anticipated if you start thinking of its effects on tides and coastal erosion. And add to that are monsoons and storms which may become more powerful as oceans warm up over the century leading to water pileups and storm surges several meters high locally. I really don’t know if the new constructions are being built with future sea-level rise in mind but every time I drive past Panvel all I see is more constructions on those mud-flats. There is no doubt that we are putting the people who will live adjacent to these creeks and channels at a very high risk of flooding and storm damage.

More Photos
Follow What's with the Climate? on WordPress.com