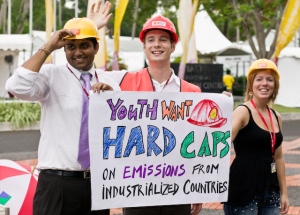 Youth: comprising 48% of the global population, or roughly 3 billion people. It is our future that was at the negotiating table in Bali last December at the UN Climate Change Conference. Yet we the youth had no say about our very own future that according to some has already been burned away by the generations preceding us. It is important to note that the so called “developing countries,” where more youth are coming from simply because of demographic advantage and where more people directly depend on their natural resources for day to day survival, have more to lose from our changing climate than those in the industrialized nations. It is ok to sit back and not be phased by it if you are not sensing the change that is already evident around us. But to those youth of South Asia, where more than a billion people depend on an increasingly erratic monsoon and where the lives of hundreds of millions depends directly on waters sourced from the retreating glaciers of the Himalayas, we must arise to address this looming crisis of global proportions and unimaginable local implications.

When I embarked on my journey to Bali this last December with the US youth delegation (yes, youth representatives of the world’s largest emitter of green house gases), I was looking forward to bridging the voices of youth from the global North with those of the global South. Being an Indian citizen, it was a rather unique opportunity to be in the middle of one of the biggest road-blocks to the success of the negotiations: the as of yet irreconcilable US vs. rapidly industrializing country view on the “common but differentiated responsibility” for mitigation of greenhouse gas emissions. Unfortunately, I found myself to be the only Indian youth present (and one of only a few from all of South Asia) at the historic talks which were supposed to define how negotiations would take shape in the post 2012 world. With this in mind, I helped form an Asian Youth Caucus on the sidelines of the informal “International Youth Delegation” which was dominated by well organized and well informed youth from Canada, Australia and the United States. In an effort to get increased participation from youth from the global South and give a more holistic angle to the youth perspective, it was apparent that we would need an unofficial Asian youth caucus which would help us share stories and ideas in the Asian context. Being the only Indian youth—I aimed to bring in the stories of and plug in the voices of youth from South Asia in this pan-Asian network.

The start of the conference was filled with high energy and high hopes—all of which turned into frustration in the second week. Recent polls in the US have revealed that approximately 80% of the population would now like to see firm action on climate change. Within the last year we saw major youth movements across the US in the form of the “Step It Up” campaign, and more recently, the largest public gathering on climate change, “Power Shift,” which saw nearly 6,000 youth from nearly every congressional district in the US converge on Capitol Hill in Washington D.C. Why then one would ask, is there a disconnect between the current administration and what the majority of Americans really want? The US negotiators in Bali asked of us whether we had the votes within the US to demand of them to make stronger commitment at the international negotiations (because it is the administration in power that dictates international policy). Thus the goal of our delegation was clear: go back to the US and mobilize the masses to take action at the polls—which we hope will happen in the coming elections. Regardless of the outcome, it is clear that change will only come with the spreading of awareness.

Meanwhile my interaction with the Indian officials can be summed up by sharing one simple interaction: upon my telling one of the negotiators that I was an Indian youth representative, he simply replied, “the youth? . . . Shouldn’t they have the same views as their elders?” This is one of the fundamental problems right now. The problem of climate change is so complex that politicians must realize that it goes well beyond the games they play. Its ecological implications are so far reaching that it is a problem that will cross-cut generations and be magnified for our generation. Youth of India, a young nation, must have their voices heard by politicians who are debating our very future. A nation at the cross-roads, while we must demand climate equity at an international level, we must also demand that we do not go down the pathway of the industrialized nations before we too find ourselves in a hydrocarbon trap. 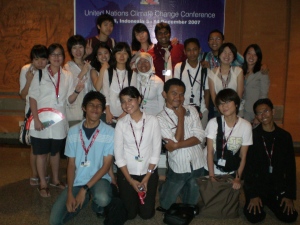 So where do we begin? There is hardly any debate amongst us youth here in India right now regarding climate change. Yet there are signs of the change all around us. Go to the rural areas and ask the struggling farmers whether they have noticed a change in the weather patterns within the past 10 or more years and the answer is always yes. Look to your cities—are they too choked with fumes from the growing number of cars in the back drop of a rapidly expanding concrete jungle with decreasing green cover? Make the connections and see where our country is headed. Some will argue of poverty and education being bigger priorities for our growing nation. Others will point at the US and the industrialized nations claiming they should take action, not us. While this is true, won’t our abject poverty make us even more vulnerable to the changing climate? Do we sit by and watch our own house burn? Shouldn’t we as Indians redefine the concept of “development” which we always associate with the West? Where do we begin? Perhaps we should start by discussing it in an Indian context and eventually establish an “Indian Youth Charter on Climate Change.” I hope that this all too important dialog will begin before it is too late.

Before the Bali conference, I never dreamed that a process on which the world’s fate rests so heavily could be so complicated and so cumbersome to the point that all sense of urgency is lost in the labyrinthine process itself. I have never been so disappointed with the international political process. We did leave Bali with a victory of sorts with the US conceding to the need for deep emissions cuts. The youth present at the conference had made a stand in the final hours of the harrowing debate and we believe that our voices were heard. It is with this hope and our attempts to get official stake holder status with the UNFCCC (Framework Convention on Climate Change) that I am more determined now than ever before to become a part of this dialog and to make change happen from the bottom up. As youth from India, a country whose role in the process is becoming increasingly apparent, we must make our voices and our presence felt not just at the national but international level. Climate change is the biggest challenge any generation has had to face in the history of the planet and how we address it will define the fate of all humanity. Who then is ready to take up this climate challenge?

More Photos
Follow What's with the Climate? on WordPress.com